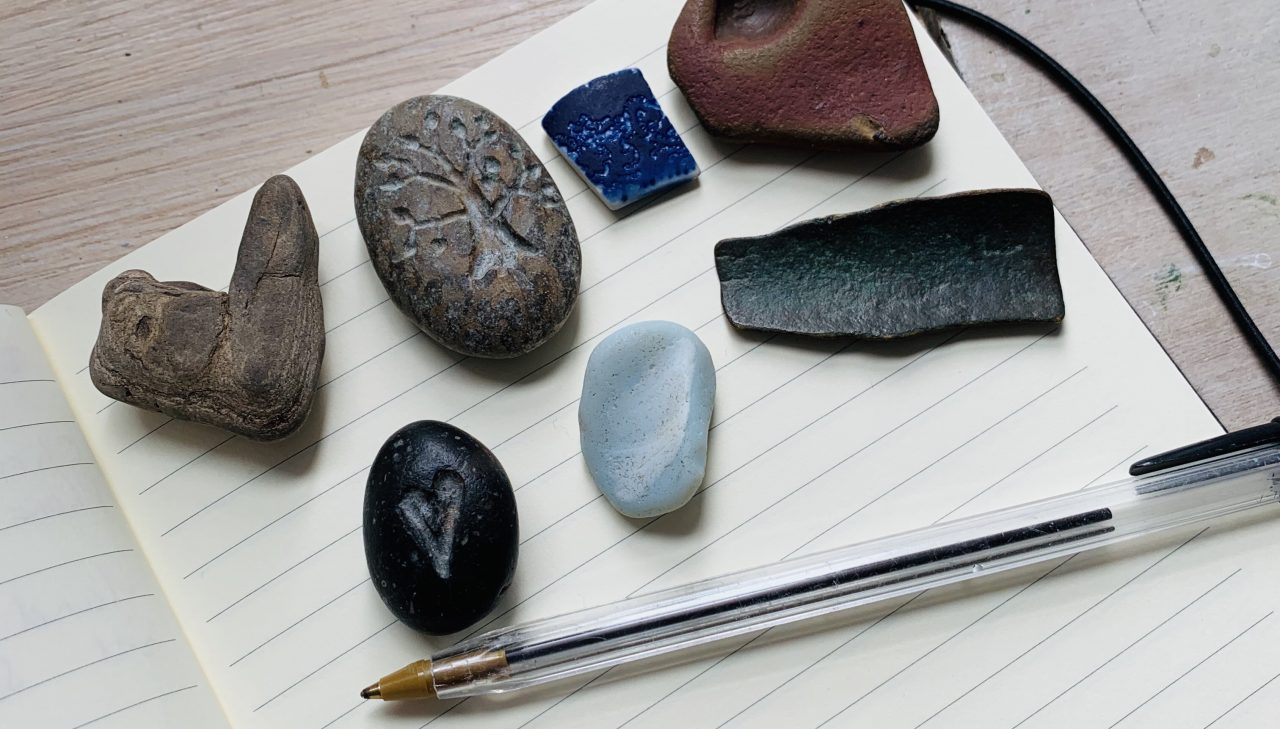 A week on the Scottish Coast. Each day filled with sea air, beach combing and woodland walks. We were lucky enough to find some plant fossils in the shale rocks.

Much needed time for writing and creativity after a busy couple of months. Looking forward to delivering more nature based creative writing courses over the next few weeks including a nature writing poetry master class and a woodland inspired four week writing course which I am planning for June / July.

I always love returning to the home comforts of Base Camp and my gorgeous cats! I think they enjoyed having the house to themselves for a week, although we have been getting lots of cuddles .

Last summer, completely by accident, I stumbled upon the breath taking nature reserve of St Cyrus. I only found it because we were looking for somewhere to let the dog stretch her (very short sausage dog legs) and to break up our journey travelling through Scotland.

We followed a track that took us from the road across a wooden footbridge and sand dunes to the beautiful wind swept beach of St Cyrus. We weren’t expecting the vast stretch of sand before us, but there was also another surprise that was one of the strangest things I have ever seen in my life.

We walked for a mile along the beach and found an inlet of rocks and granite stone. In one of the inlets thousands and thousands of sprats had been trapped by the tide. Maybe chased in by birds? The whole pool was glittering with fish as they jumped to get air. Another young group of walkers was trying to dig them a trench to reach the sea. It was an eery sight as the pool glittered and fizzed with fish, many that hadn’t made it lined the edges of the shore line.

Further around the inlet the rock pools were deep and round with perfect clarity, lined with shells and fronds of jewel coloured seaweed.

The whole bay was stunning, there was hardly another person for miles. A few tiny bothies were visible set back in the dunes. Someone had used driftwood to create some fabulous shelters, some of the wood was so weathered it looked like rivulets of water in the sand.

I woke up this morning dreaming of the beach, of the crunch and dig of sand under foot, the sound of the wind sweeping the bay and the pull of the tide.

At the end of the walk, we found the visitor Center with a poem carved into stone marking the placement of a time capsule. If I could bottle St Cyrus and take a lung full of sea air whenever I felt like it, I would have done so!

A recent hike in the mountains of Glen Clova took me to Loch Brandy (sadly not a Loch full of actual Brandy according to my Scottish husband).

The hike gave me the opportunity to begin working on a new collection of poetry. I have been reading Mary Oliver’s A Poetry Handbook, which I am thoroughly enjoying and is helping me to develop my writing.

The poem here is not yet fully finished, reading it again I have more words to cut. A fine poem is like a painting – many layers and edits are made before the finished piece is ready, and for a true artist there is always something that could be tweaked.

Loch Brandy itself has a mysterious causeway running over quarter of the Loch. Some say it was made for fishing the lake – you can see the outline of the causeway when you stand on higher ground. The Loch glittered as we paddled due to the fragments of fine sand – quartz and granite which sparkled as we stirred up the water.

We encountered what I think was an ermine moth caterpillar half way up the mountain, hence the reference to the moth in my poem. We also saw several peacock butterflies which appeared so fragile and beautiful against the landscape.

I would love to hear from any other poetry writers – any recommendations of books or resources. I would also love to read your poetry.

*Walking to Loch Brandy is copyrighted to myself. Please do not reproduce this writing or poem without my full permission. (Emma McKenzie).

It’s no secret that I love books. Reading is travelling in the mind. Diving into another world, or places that we haven’t yet had chance to explore.

Recently I’ve been lucky enough to have been working on a project about Darwin for the Field Studies Council. I thoroughly enjoyed learning about Darwin’s life, but was also surprised to discover that after his epic voyage on the Beagle he rarely travelled and stayed within his home for much of the rest of his life. (Mind you – five years at sea might have felt like enough travelling for one life time!)

Reading about Darwin inspired me to learn more about another naturalist, John Muir (1838 – 1914). Much less known in the UK John Muir started his life in Dunbar, Scotland. His Father was strict and John Muir had a harsh upbringing. To escape he often wandered into the hills and found solace in the natural world.

When John Muir was 11 his father moved the family to America to pursue a new life and the preach for the Disciples of Christ, a strict religious order. Muir left home at a young age of to pursue work for himself (he was a brilliant inventor and engineer), Muir also continued his pursuit of knowledge of botany and the natural world and in 1867 decided to walk 1000 miles to the Gulf of Mexico.

Muir often slept wild, meeting strange folk along the way as well as discovering for himself what we now know as some of the greatest national parks such as Yosemite.

Muir published eight books over his life time recording his findings and thoughts. He is now known as one of the greatest environmental philosophers and the person who first put forward the idea of National Parks.

Muir recognised our disconnect from nature and worked hard to protect the world and find balance. I love his words about life and death that reflect that humans are often divorced from the life cycle and the natural world. We often see death as a medical failing. There is much comfort in John Muir’s words which also make me more determined to appreciate each day that I have.

‘Let children walk with Nature, let them see the beautiful blendings and communions of death and life, their joyous inseparable unity, as taught in woods and meadows, plains and mountains and streams of our blessed star, and they will learn that death is stingless indeed, and as beautiful as life, and that the grave has no victory, for it never fights. All is divine harmony.’ John Muir

The pictures are from the Scottish Hills as a nod to John Muir’s birth place. I highly recommend a visit to John Muir Country Park if you are in the East Lothian area. My favourite beach is Ravensheugh Beach – also a place that the artist William Turner made some beautiful paintings and somewhere I will be visiting as soon as possible.

Recommended Reading for your own adventures:

On the Trail of John Muir – Cherry Good.